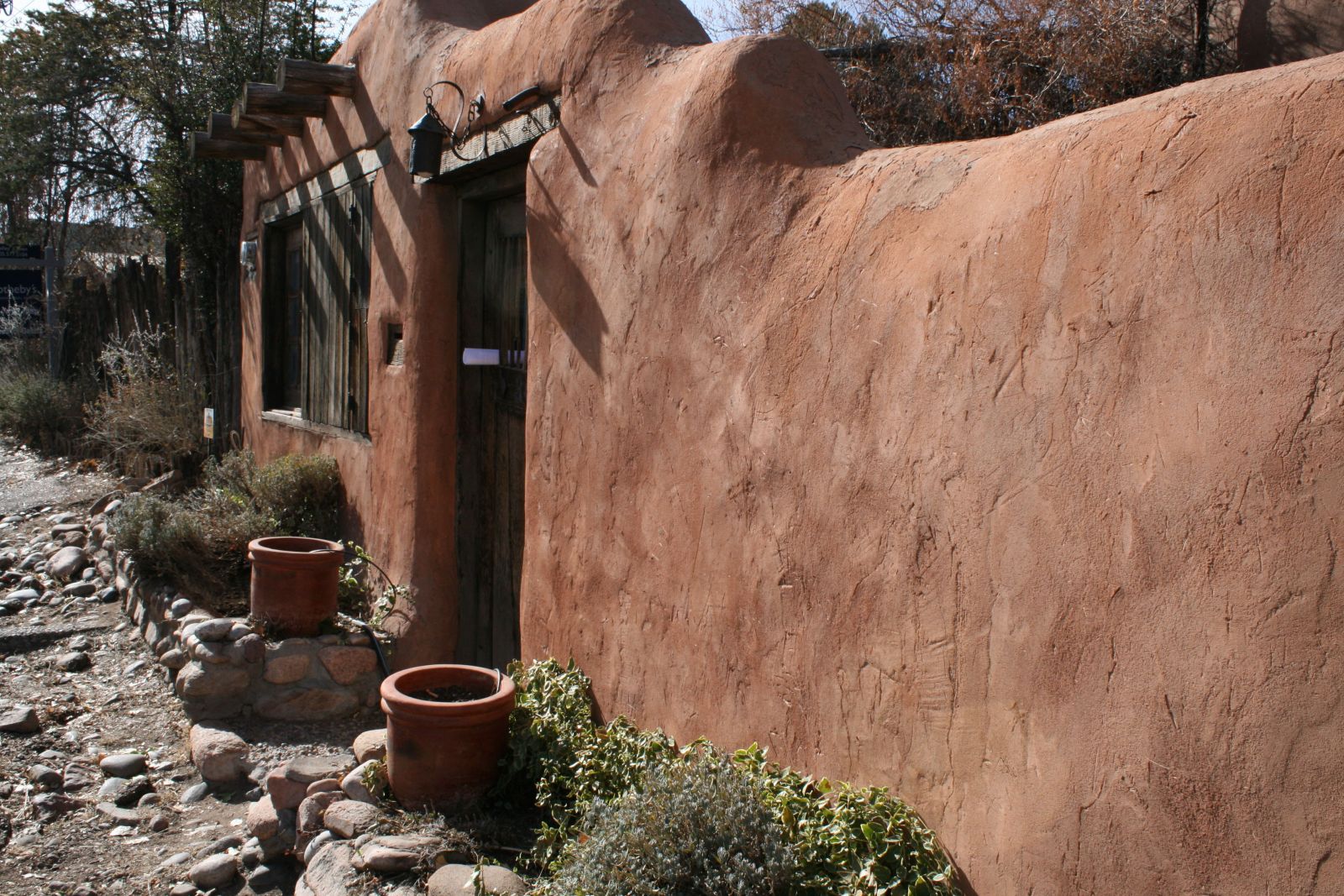 Not to be confused with that company that emails you hourly to update their product.  Here, adobe means sun-dried bricks made of mud and straw.  Such bricks have been used in construction for thousands of years and many adobe structures can still be found in Santa Fe, such as the wall shown here. Don’t be fooled, though.  Some modern structures may appear to be constructed of adobe when in fact they are cinder block covered with concrete that has been painted or tinted to look like adobe.  This technique may have evolved because if your Santa Fe house doesn’t look “like Santa Fe”, when you try to sell it, it will be on the market “forever.” 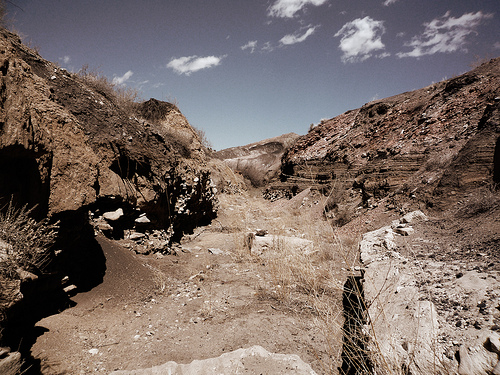 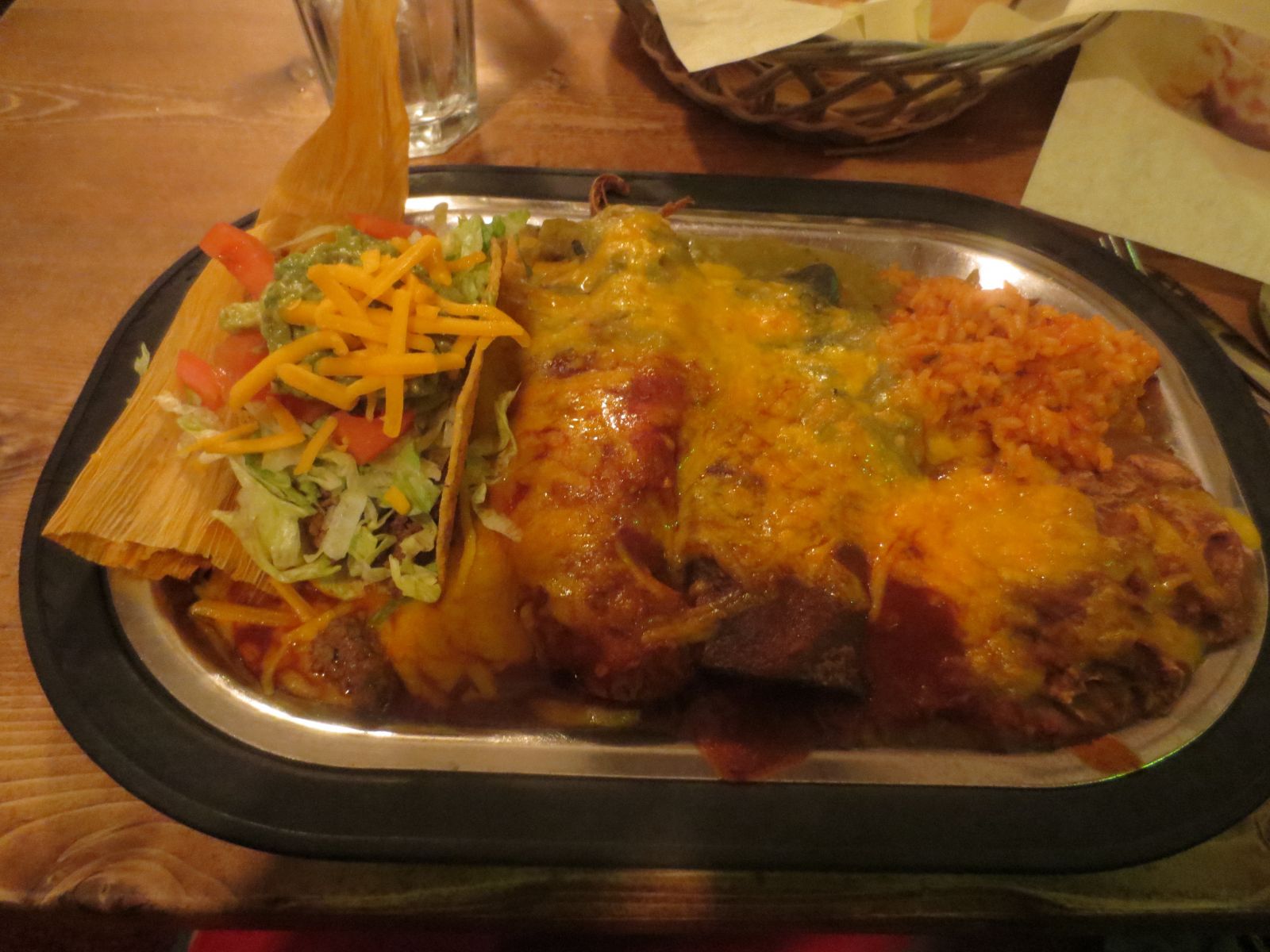 Burritos, enchiladas, huevos rancheros and many other foods can be ordered smothered with either red or green chile.  If you can’t decide between red and green, you can order your dish smothered Christmas style, meaning smother half in red chile, half in green chile.  No telling what would happen if you attempted to dictate to your server which half should be what. I wouldn’t try it. The dish shown here is a combination plate, Christmas style, from Maria’s Mexican Kitchen in Santa Fe. 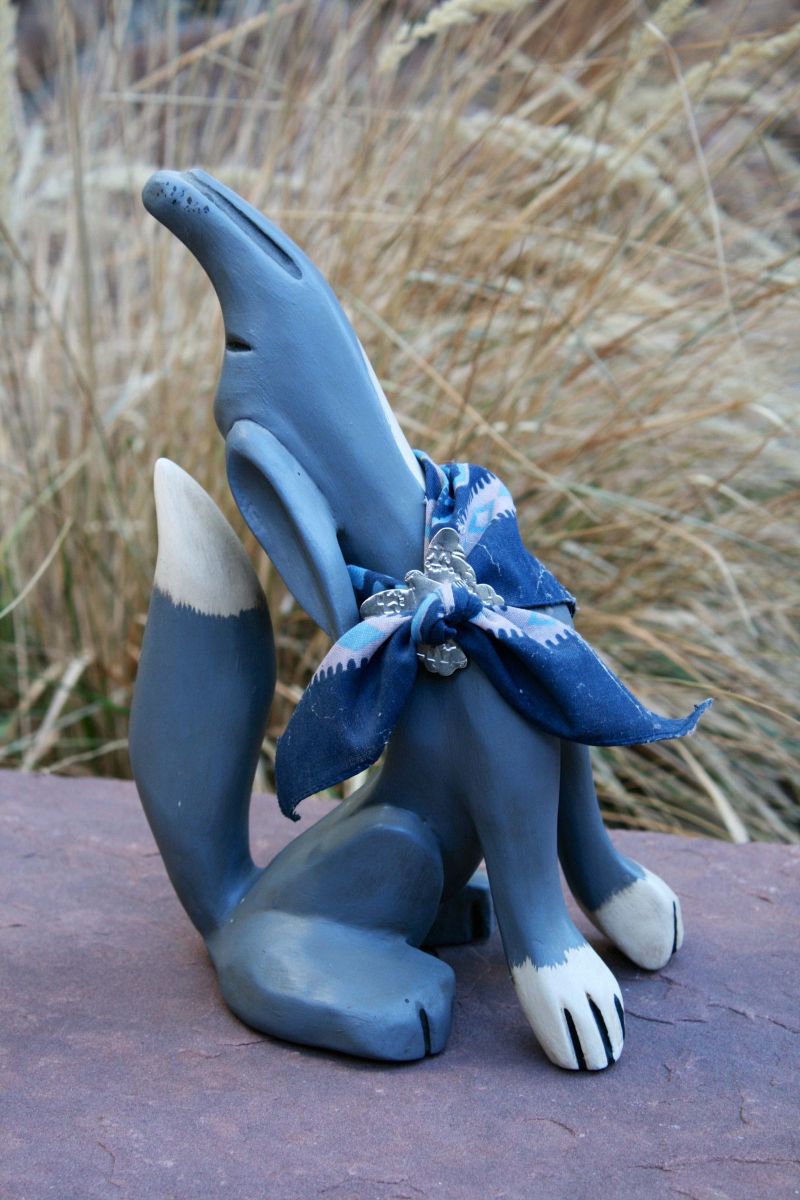 Howling, neckerchief-wearing coyotes are an icon of Santa Fe Style. Perhaps they were the precursor to the more recent trend of putting neckerchiefs on Golden Retrievers. For some reason, similarily accessoricizing cats has not caught on. 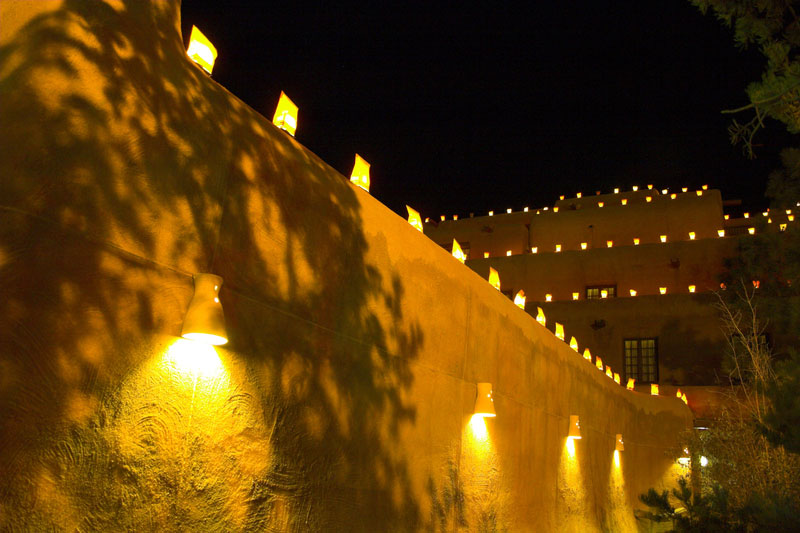 Sylvie grew up with farolitos that were simply brown paper sacks partially filled with sand and lit candles.  In time, people with little else to do determined the farolito’s open flame posed a fire hazard or some other danger. Modern day farolitos are machine-manufactured plastic sacks with electric candles inside them. These new versions are just as attractive from a distance, but lack charm. Plus, you cannot light your cigarette with one.  Santa Fiends argue about whether the correct name is faralito or luminaria. If you want to impress the Santa Fe locals with your vast knowledge of Santa Fe culture, it’s safest to stick with faralito.

Woolworth’s on Santa Fe’s Plaza made delicious Frito pies.  It closed down in the 1990’s, but you can make your own.  All you need is a snack-sized bag of Fritos, some chili, shredded cheddar cheese, and raw chopped white onion.  To be authentic, you serve this dish right out of the Frito bag.  So, hold the bag on its side and cut it open.  Set aside a few Fritos to use as garnish. Ladle the chili into the bag, followed by the cheese and white onion. Garnish with reserved Fritos.  Shield your hand from the bag’s heat with a wad of napkins and pick it up. Insert a plastic spoon into it. This dish was best consumed whilst strolling Woolworth’s aisles, but eating it whilst watching Breaking Bad reruns is an acceptable substitute. 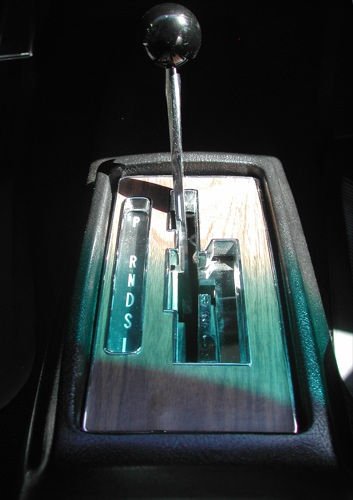 The Hurst Shifter shifter shown here is similar to that which Kevin so coveted.  Old school gearheads will recognize it and perhaps have fond memories of their own shifters.  Non-gearheads won’t give a crap. 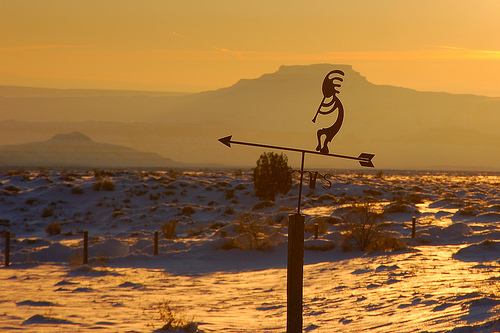 Kokopelli is a fertility deity.  When Sylvie was growing up, she never saw a Kokopelli-anything anywhere. For some inexplicable reason – certainly not because Santa Fe lacked in fertility – its likeness began to show up everywhere in the Southwestern United States.  On hoodies, socks, and T-shirts. On coffee mugs and mailboxes, wind chimes, weather vanes and lamps. In paintings, on plaques, pottery, jewelry, fingernail decals, and plush toys.  And don’t even get Sylvie started on the tattoos. 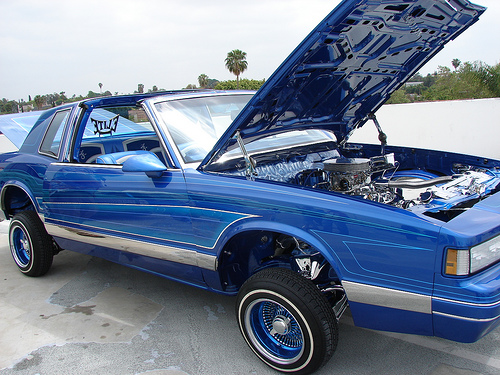 Española is the self-described  “Low Rider Capital of the World.” One might have chosen a picture of a less attractive and perhaps more typical New Mexico low rider, but that would be ill advised, so let’s just admire the nice one shown here. 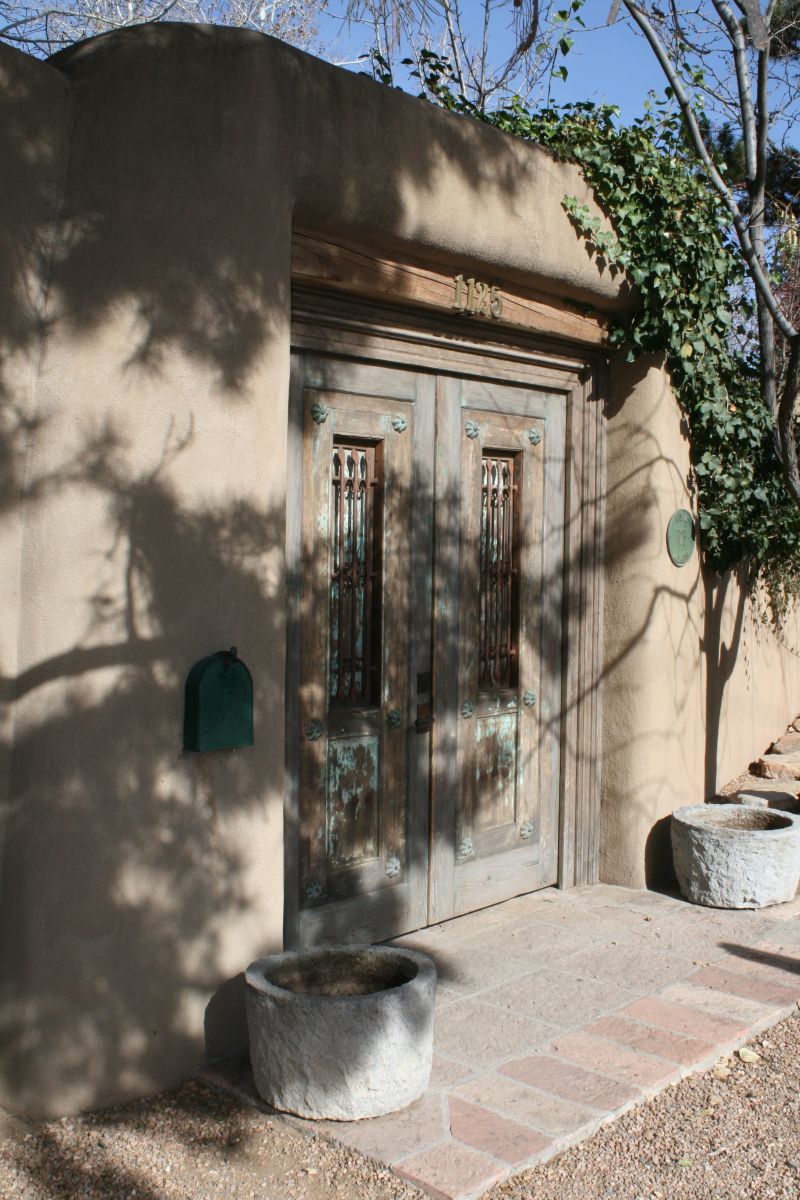 Two important aspects of Sylvie’s Economic Theory of Wall Height are high adobe walls and fancy gates. Orlando’s parent’s house had a high wall like this one, punctuated by a beautiful handcrafted  gate.

Palace of the Governors

The Palace of the Governors is a building that faces the Santa Fe Plaza. It was home to New Mexico’s  governors for many years, but it is now a museum.  Shown here is the Palace’s famous portal, where Native Americans sell jewelry and other art.  Like many things in Santa Fe, the portal became the center of a controversy. In the ‘70’s, an Anglo couple declared their Fourteenth Amendment rights had been violated and that they should be allowed to sell their wares alongside the Native Americans on the portal.  The Anglos lost their lawsuit and the tribes rejoiced. Sylvie did too. 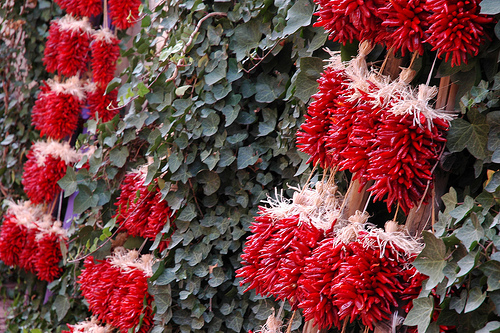 A ristra is dried foodstuffs strung on a length of twine. In Santa Fe, the foodstuff is usually red chile peppers and its purpose is primarily decorative.  An especially nice collection of ristras is shown here. 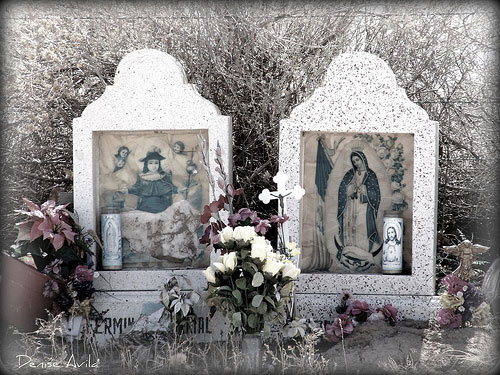 Roadside memorials (sometimes referred to as descansos) are common in New Mexico. Traffic fatalities in the state are on the rise, so if you drive the highway between Santa Fe and Albuquerque, you are guaranteed to see at least one. Out of respect to the recently departed, an “old” memorial in the Pojoaque area (just north of Santa Fe) is shown here.

This road looks a lot like the highway between Santa Fe and Roswell, but even more so. 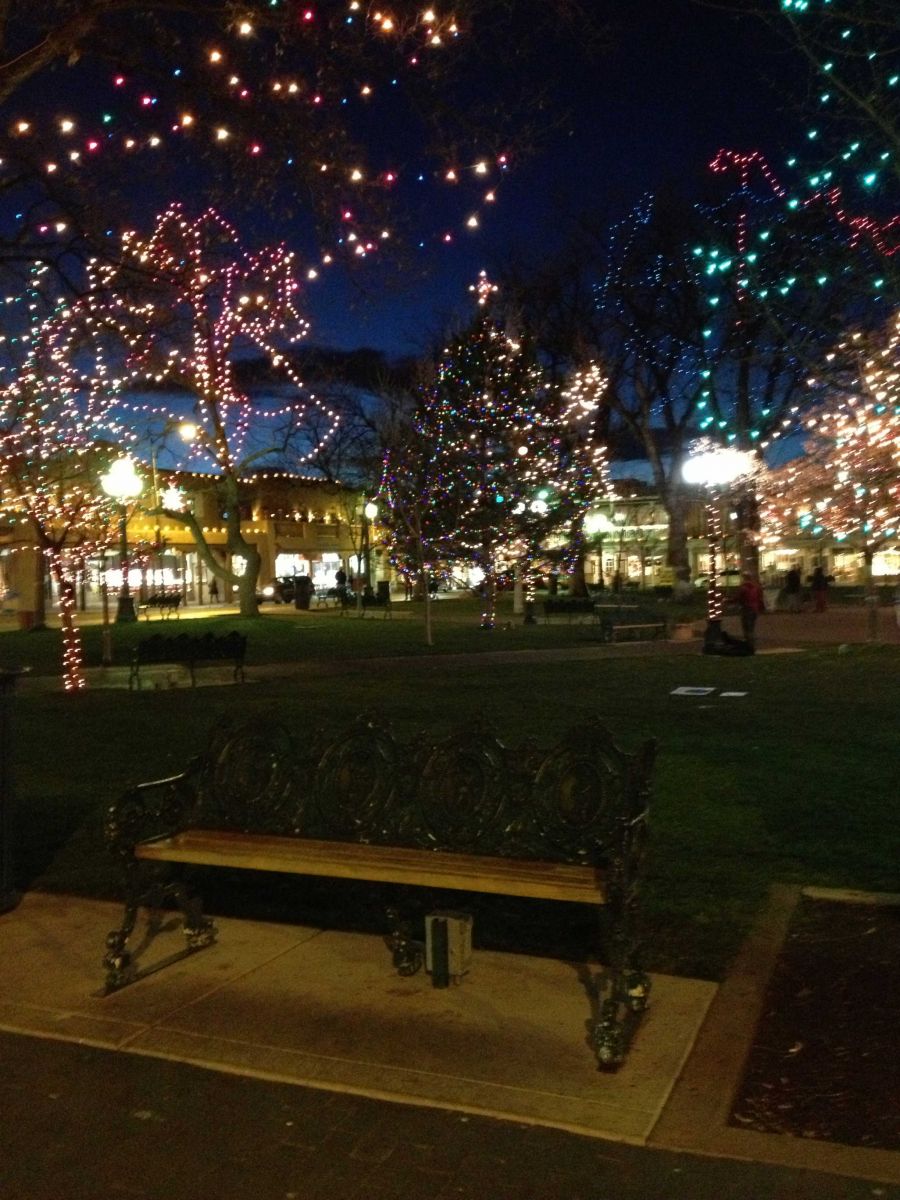 Sylvie and Emily have always loved Christmas displays and sometimes made the trip to see them at The Plaza.  It’s no Rockefeller Center, but it’ll have to do. 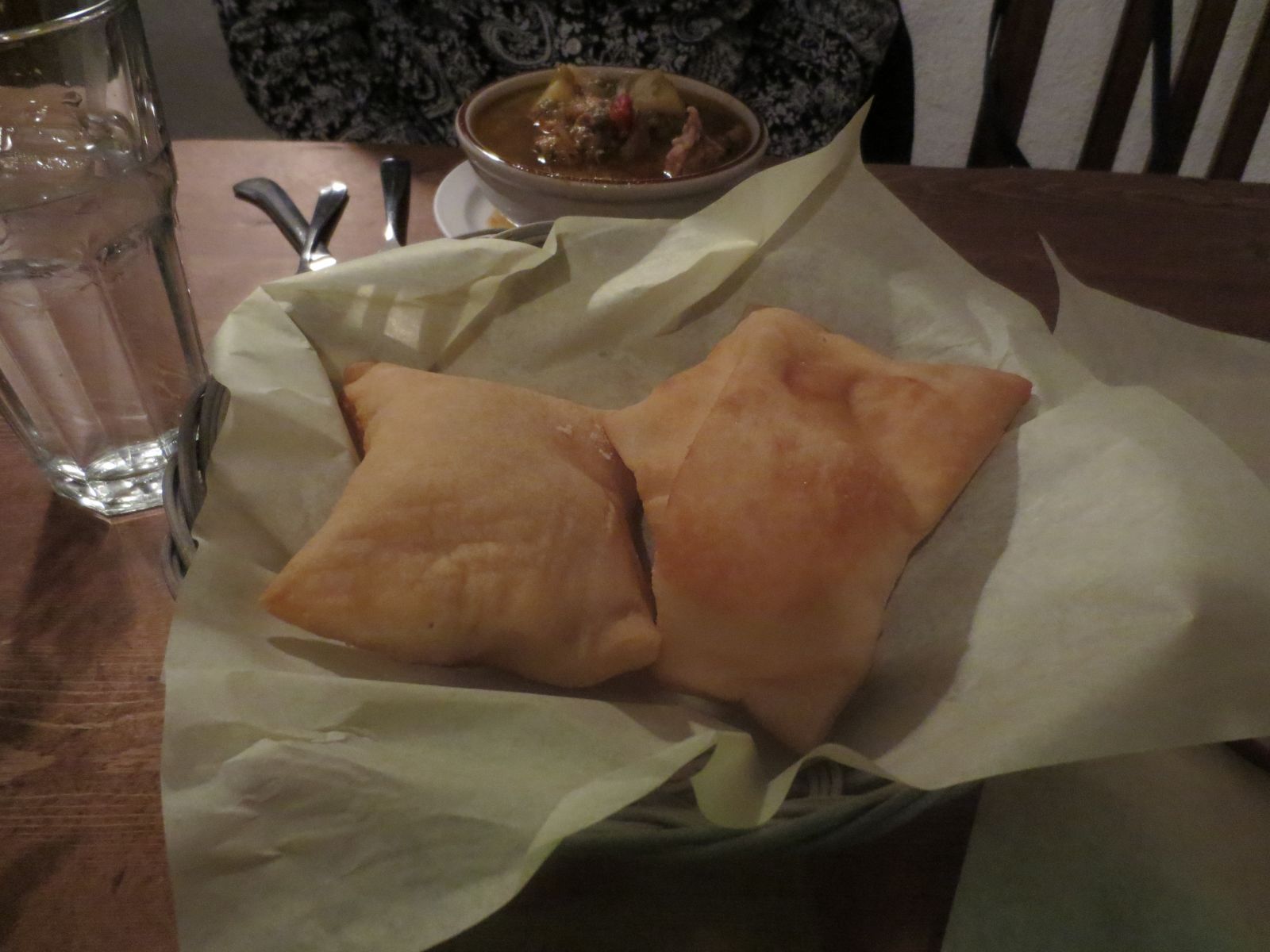 Try making these at home and you’ll find yourself hosing grease off of the stove, the counter and the floor for a week. It might be best to leave the task to the professionals. In New Mexico, sopaipillas are typically served along side your meal, not sprinkled with sugar and cinnamon and served as a dessert. 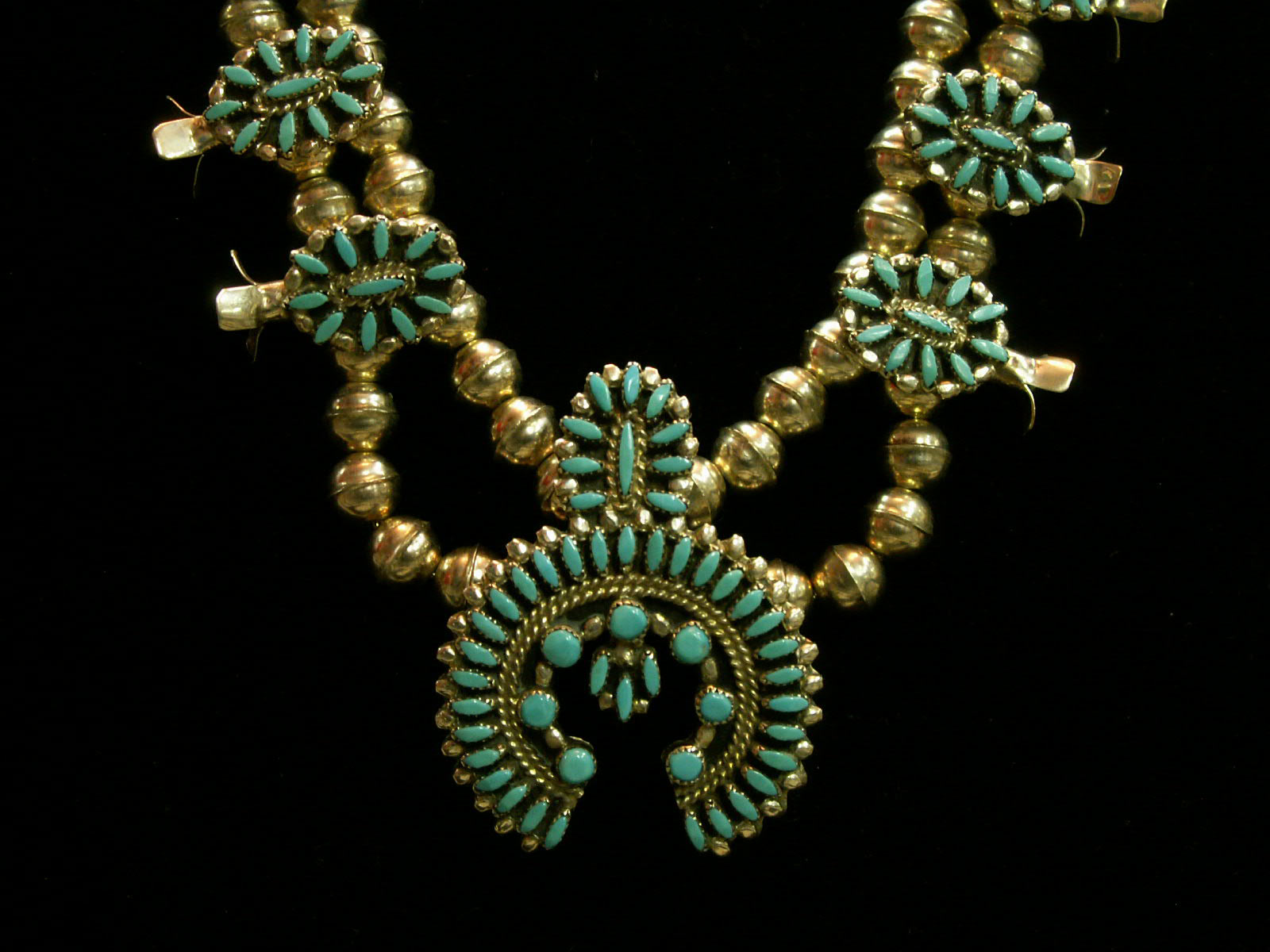 The squash blossom is a type of necklace, commonly made by the Navajos and other tribes of the American southwest. The necklace shown above is, as of this writing, available at the Cancer Cache Thrift & Gift Shoppe, a not-for-profit charity business that raises money to provide free hats, wigs, scarves, and selected prosthetics and medical equipment to cancer patients.

Yes, even a necklace can be controversial in New Mexico. In 2011, the squash blossom became the state’s official necklace. Some say that given N.M. ranks pesistantly as one of the most impoverished in the nation, its legislature surely has more pressing matters to which it should attend. Others (primarily legislature?) say … say … hmmm… what do they say?

Not to be confused with squash blossoms (see above), the Squashed Possum Band consists of Jim Oliver and Chris Cangeleri from Seaford, New York. 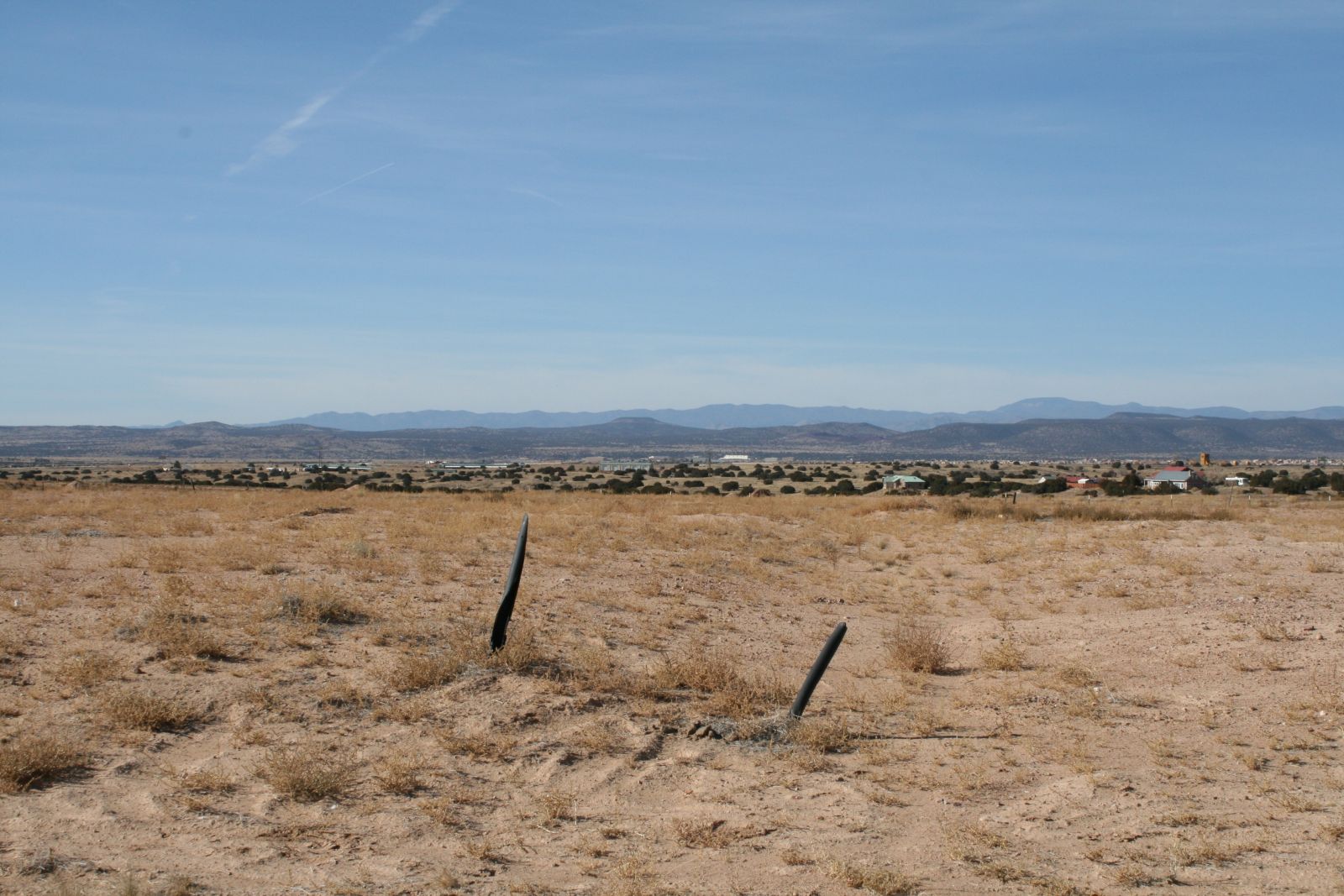 Also referred to as “the sticks” or “the weeds” or to a lesser extent, “the boonies.”  The toolies is place away from people and traffic where one can indulge in activities that one’s parents would not likely approve.  This location pictured here is remote enough to be considered “The Toolies” and yet is no more than fifteen minutes from downtown Santa Fe. You just have to know which direction to head in. And I’m not telling you. 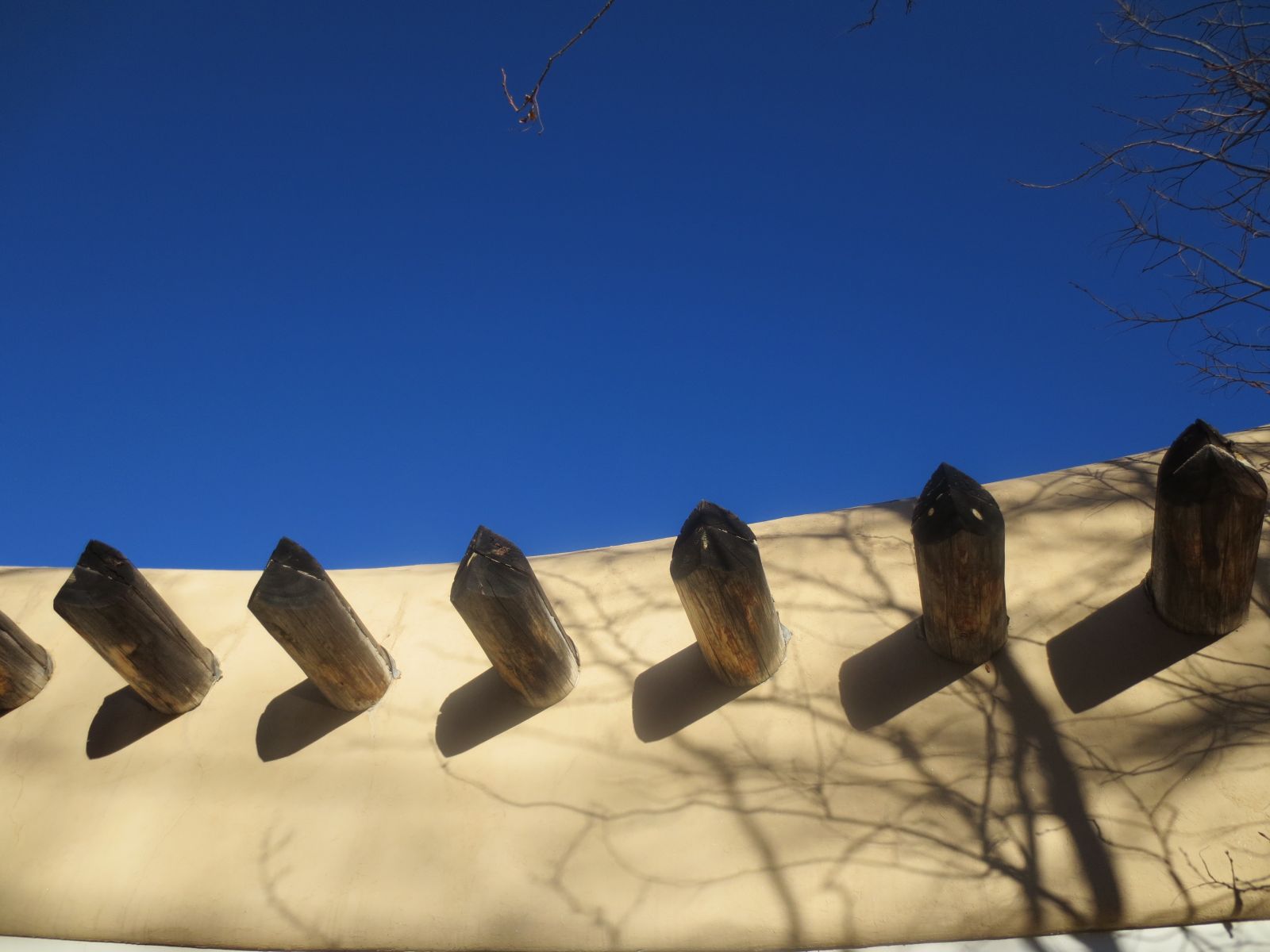 In the southwestern US, viga refers to a type of rafter or beam.  Authentic vigas are rough-hewn logs used to hold up the roof. They are often exposed on the interior of the building and may, as shown in this picture,  extend to the outside of the dwelling. Fakery abounds. Strictly decorative vigas are just the ends of logs stuck onto the outside of a building.  Some faux vigas aren’t even wood —they’re polyurethane. 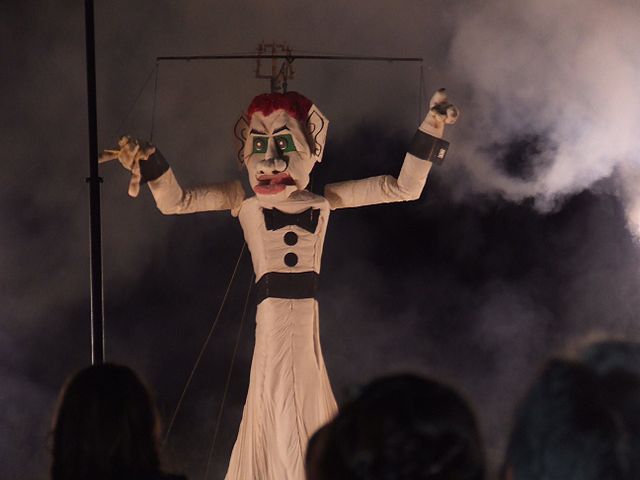 Sylvie did a great job describing Zozobra, but sometimes a picture is indeed worth a thousand sarcastic words.